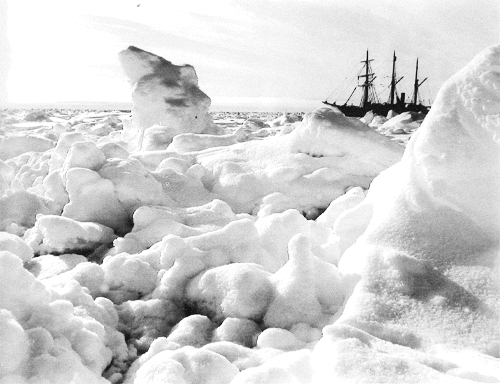 “[The noise of the ice was] like an enormous train with squeaky axles being shunted with much bumping & clattering. Mingled with this were the sound of steamer whistles starting to blow… & underfoot moans & groans of damned souls in torment. A constant undertone as of a heavy distant surf is heard when the louder noises… cease.

“It is impressive to stand on the blocks of heavy rafting ice & feel the irresistible forces of Nature working under your very feet… The ice… tents & domes upwards, breaks rafts in huge blocks… that travel forward at a steady rate of 3 feet a minute. Occasionally a thud is heard as a block topples over. Suddenly sound & motion cease, renew for a moment, then all is still again — the current has deflected or the floe has yielded to pressure.

“The ship was quite invisible, and one had to ‘steer home’ by the stars…”

— Frank Worsley, out for a walk on the floes