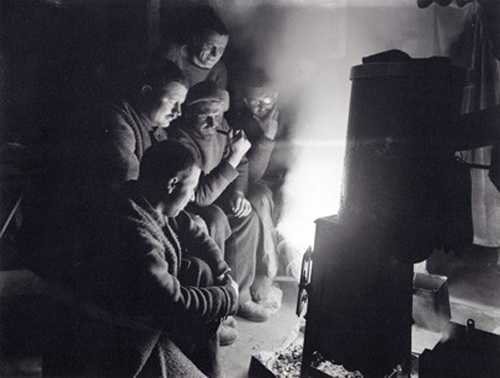 “One looks quite forward to one’s night watch and always contemplates doing a far greater number of odd jobs than one actually has time to accomplish. Tonight I had intended to wash myself and my clothes, sort out a box of bolts and nuts, and write up numerous blank spaces in this diary! It has been as much as I have been able to achieve to have a bath and wash my clothes.

“One or two self-diagnosed cases of insomnia (a complaint often brought on by post-prandial naps) generally turn up quite unashamedly at the night watchman’s supper time and cheerfully share with him, or in other words deprove him of part of his much-needed sustenance, slinking off to their respective lairs as soon as their gastronomic desires have been satisfied. No wonder then that desultory depredations occasionally occur, but they are never of so serious a nature that we cannot afford to wink at them.

“The prospective night watchman has the privilege of turning in during the afternoon immediately preceding his night watch, and the day following he is at liberty to sleep all day if he so desires. Of the former privilege he generally avails himself, though the noisiness that goes on all day precludes any real slumber. Nearly all of us suffer in varying degrees from Antarctic insomnia. To sit up all night is the finest cure for insomnia there is.”