Posted on September 5, 2016 by Ernest Shackleton

A close reporting of the fate of the Ross Sea Party has been outside the scope of this narration, as Shackleton had no way of receiving news from them until some of his party had reached South Georgia, the telegraph office, and news, in 1916. The Aurora was the second ship of the Expedition, meant to sail to the Ross Sea on the other side of the continent, and to cache depots of supplies at calculated intervals between the Pole and the sea on that side. Thus (in the original plan) when the Endurance landed at Vahsel Bay and Shackleton’s shore party hiked to the Pole and past, they would only need to sledge supplies for half the voyage, and would retrieve the depots in sequence as they completed the full crossing.

The trans-Antarctic crossing did not happen, but the Aurora fulfilled her directive, and the sledging party laid depots as instructed well inland. But on their return to the shore, they found that the Aurora had been blown out to sea with most of the men, and stranded those remaining on the far side of the continent. The ship was solidly encased in a sturdy floe, which had detached from the pack and been blown far out to sea by a blizzard, and there drifted helplessly for almost 10 months. Finally it broke free of the floe and managed to limp back to New Zealand. The shore party believed the Aurora lost at sea, and, after a second depot-laying journey, were themselves split between Hut Point and Cape Evans. Of that second foray, Shackleton wrote in his memoir South, “No more remarkable story of human endeavour has been revealed than the tale of that long march.” The survivors occupied themselves with their scientific studies, and settled in to wait for rescue from land or sea. 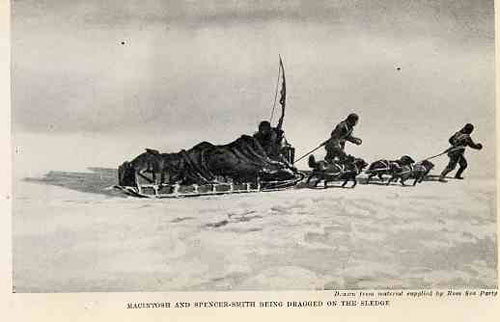 Mackintosh and Spencer-Smith on the sledge; “Image was ‘drawn and painted, probably by George Marshall, from material supplied to the artist by surviving members of the Ross Sea Party.'” (Wikipedia)

So after Shackleton’s return from Elephant Island on the Yelcho, and having arranged passage for the crew back to England and the war, he made his way with Worsley to San Francisco and from there straight to New Zealand, that he might join the Aurora before she left on the rescue mission; aboard the Aurora they reached McMurdo Sound and Cape Evans on 10 January 1917. There they found seven of their comrades in an even more fraught state than those on Elephant Island—although they did have a hut and supplies, they had not seen or heard anything from the outside world since December 1914. Three of the party had perished during that time: Arnold Spencer-Smith of scurvy after the second depot-laying journey, and Aeneas Mackintosh and Victor Hayward while attempting to cross from Hut Point to Cape Evans over thin ice. When Shackleton and Worsley arrived they searched for another week for some trace of Mackintosh and Hayward, but found nothing. Spencer-Smith was interred in the ice.

Finally they headed back to New Zealand with the ten survivors—seven men and three dogs, whom the men credited with their survival. Only when this was accomplished did Shackleton make his way, via Australia, back to England and the ongoing world war. It was 1917.

The Aurora; photographer “unknown, probably one of Aurora’s crew; Shackleton never mentioned who took this photo in any of his books or records.” (Wikipedia)

Polar Explorer. Leader of the Imperial Trans-Antarctic Expedition, 1914-1917.
View all posts by Ernest Shackleton →
This entry was posted in Images, Other Voices, Shackleton. Bookmark the permalink.
%d bloggers like this: