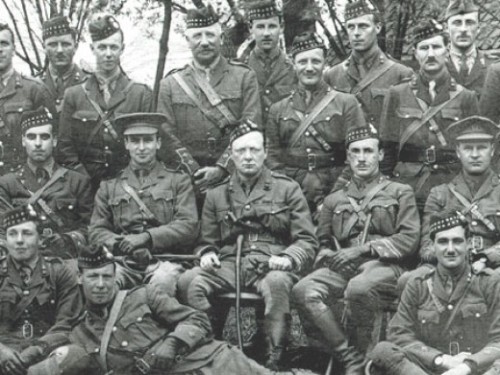 “Fancy that ridiculous Shackleton & his South Pole — in the crash of the world.

“When all the sick & wounded have been tended, when all their impoverished & broken hearted homes have been restored, when every hospital is gorged with money, & every charitable subscription is closed, then & not till then would I concern myself with those penguins. I suppose however something will have to be done.”

— letter from Winston Churchill to his wife, writing from a Flanders trench, 1916 [Churchill in WWI]

“Churchill, of course, had originally been responsible for allowing Shackleton to proceed. He was, however, no longer First Lord of the Admiralty, having resigned over the failure of the Dardenelles campaign. … He was now a Lieutenant-Colonel, in command of the 6th Royal Scots Fusiliers. He was in the trenches at Ploegstreet, in Flanders, in the Ypres Salient, one of the bloodiest battlefields of the Western Front.”