Should a visitor arrive at midnight

Posted on December 18, 2015 by Ernest Shackleton 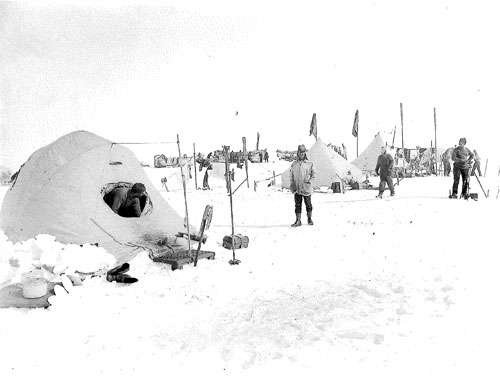 “[Should a visitor arrive at midnight…] he would notice that… it was still light, the sun never setting at this time of year in this latitude. He would have to pass a line of dogs tethered in teams to wires… secured at one end to their own loaded sledges and at the other to an iron stanchion driven deeply in the snow. The sledge trace is in position and the harnesses all secured in place and ready to be put on the dogs… The sledges are loaded and lashed…everything ready to be moved at a moment’s notice.

“At sight of the visitor, the dogs set up a furious barking… The night watchman… greets the visitor, and shows him the general arrangement of the camp:

“The gallery, so called, is a canvas structure made from the ship’s sails and spars. Inside… is the stove… In the same ‘galley’ is the little library…saved from the ship. Here also Marston does his cobbling, Hurley makes his self-devised apparatus etc. etc. There is also in here a chronometer giving the local time, and of all things in the world, a looking glass.”