Posted on October 30, 2015 by Ernest Shackleton 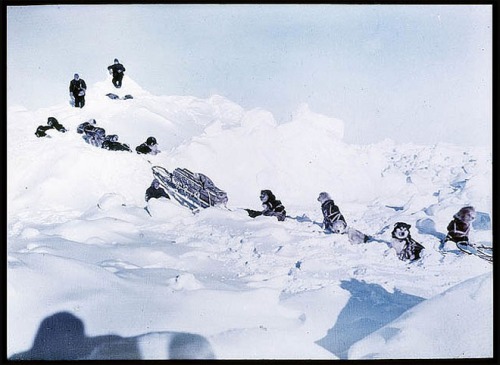 “A pathfinding party of three precedes the advance.. Then follows seven sledges, each drawn by seven dogs, and loaded with an average load of 100 pounds per dog. Five teams then return, and bring up the balance of the gear loaded on five sledges. The remaining two teams, Wild’s and my own team, will link together and bring up the light boat. The balance of the party, eighteen members, will man haul the large boat—the James Caird…”

“They tried to guide the main party along a level route, but every few yards it was necessary to cross a pressure ridge. Then they set to work, chopping away at it until they had carved out a miniature mountain pass for the boats. On particularly high ridges, they had to build a ramp of ice and snow up one side and down the other.”