I had to admit that further effort was useless

Posted on February 14, 2015 by Ernest Shackleton 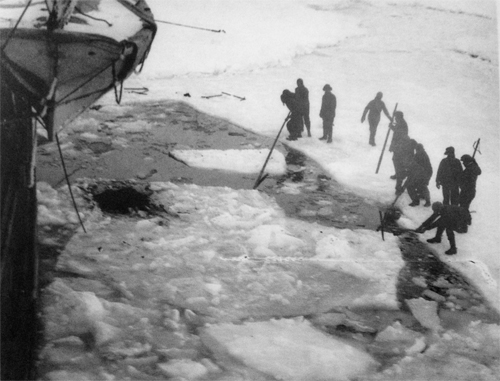 “Early in the morning of the 14th I ordered a good head of steam on the engines and sent all hands on to the floe with ice-chisels, prickers, saws, and picks. We worked all day and throughout most of the next day in a strenuous effort to get the ship into the lead ahead. The men cut away the young ice before the bows and pulled it aside with great energy. After twenty-four hours’ labour we had got the ship a third of the way to the lead. But about 400 yards of heavy ice, including old rafted pack, still separated the Endurance from the water, and reluctantly I had to admit that further effort was useless. Every opening we made froze up again quickly owing to the unseasonably low temperature. The young ice was elastic and prevented the ship delivering a strong, splitting blow to the floe, while at the same time it held the older ice against any movement.”