Posted on January 21, 2015 by Ernest Shackleton 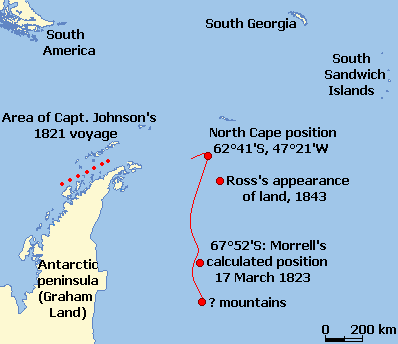 “New South Greenland, sometimes known as Morrell’s Land, was an appearance of land recorded by the American captain Benjamin Morrell of the schooner Wasp in March 1823, during a sealing and exploration voyage in the Weddell Sea area of Antarctica. Morrell provided precise coordinates and a description of a coastline which he claimed to have sailed along for more than 300 miles (480 km). Because the Weddell Sea area was so little visited, and hard to navigate due to ice conditions, the alleged land was never properly investigated before its existence was emphatically disproved during Antarctic expeditions in the early 20th century.

“At the time of Morrell’s voyage, the geography of the then unnamed Weddell Sea and its surrounding coasts was almost entirely unknown, making the claimed sighting initially plausible. However, obvious errors in Morrell’s voyage account, and his general reputation as a fabulist, created scepticism about the existence of this new land. In June 1912 the German explorer Wilhelm Filchner searched for but found no traces of land, after his ship Deutschland became icebound in the Weddell Sea and drifted into the locality of Morrell’s observation. A sounding of the sea bottom revealed more than 5,000 feet (1,500 m) of water, indicating no land in near proximity. Three years later, trapped in the same waters with his ship Endurance, Ernest Shackleton was able by similar means to confirm the land’s non-existence.”