Posted on January 14, 2015 by Ernest Shackleton

“I had been prepared for evil conditions in the Weddell Sea, but had hoped that in December and January, at any rate, the pack would be loose, even if no open water was to be found. What we were actually encountering was a fairly dense pack of a very obstinate character. Pack ice might be described as a gigantic and interminable jigsaw puzzle devised by Nature. The parts of the puzzle in loose pack have floated slightly apart and become disarranged; at numerous places they have pressed together again; as the pack gets close the congested areas grow larger and the parts are jammed harder til finally it becomes “close pack,” when the whole of the jigsaw puzzle becomes jammed to such an extent that with care and labor it can be traversed in every direction on foot. Where the parts do not fit closely there is, of course, open water, which freezes over in a few hours after giving off volumes of “frost-smoke.”

In obedience to renewed pressure this young ice “rafts,” so forming double thicknesses of a toffeelike consistency. Again the opposing edges of heavy floes rear up in slow and almost silent conflict, till high “hedgerows” are formed round each part of the puzzle. At the junction of several floes chaotic areas of piled-up blocks and masses of ice are formed. Sometimes 5-ft to 6t-ft piles of evenly shaped blocks of ice are seen so neatly laid that it seems impossible for them to be Nature’s work. Again, a winding canyon may be traversed between icy walls 6 f to 10 ft high, or a dome may be formed that under renewed pressure bursts upward like a volcano. All through the winter the drifting pack changes — grows by freezing, thickens by rafting, and corrugates by pressure. If, finally, in its drift it impinges upon a coast, such as the western short of the Weddell Sea, terrific pressure is set up and an inferno of ice blocks, ridges, and hedgerows result, extending possibly for 150 or 200 miles off shore. Sections of pressure ice may drift away subsequently and become embedded in new ice.” 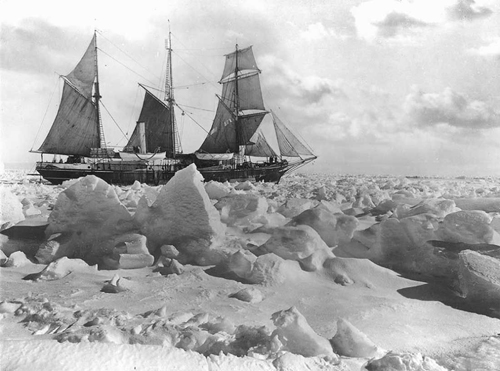 “Another point that may require to be explained was the delay caused by wind while we were in the pack. When a strong breeze or moderate gale was blowing the ship could not safely work through any except young ice, up to about 2 feet in thickness. As ice of that nature never extended more than a mile or so, it followed that in a gale in the pack we always had to lie to.”

Polar Explorer. Leader of the Imperial Trans-Antarctic Expedition, 1914-1917.
View all posts by Ernest Shackleton →
This entry was posted in Shackleton. Bookmark the permalink.
%d bloggers like this: