Posted on December 3, 2014 by Ernest Shackleton 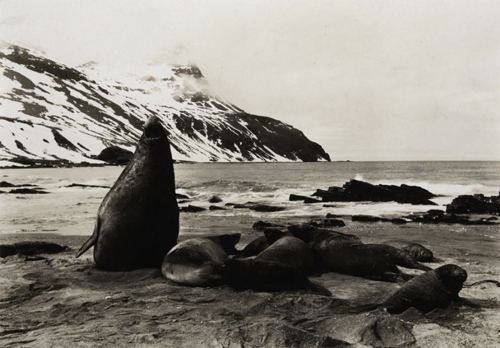 “I had many pleasant rambles and excursions on the Island, and each time was more deeply impressed by its wild and rugged mountains, its terraced glaciers, and beauteous fjords. Here one can study sub-Antarctic life with all its attendant charm… Our good friend Rasmussen took parties of the expedition, self, included, to the far reaches of Moraine Fjord, and the Nordenskjöld Glacier. Moraine Fjord I mention specially on account of the lasting impression I retain of it. A narrow waterway extending some two miles between jagged and escarped mountains, where nature admires her work in a liquid mirror. At the head of the Fjord are three glaciers that take their rise near the majestic base of Mount Paget and whose occasional boom and crash precede the dislodgment of icy fragments, the only sound that awakes its echoes… We visited Royal Bay, Gold Bay, Hund Bay, and Larsen Harbour. The fifty to sixty miles of coast seen, presented an unbroken chain of rugged mountains and peaks, interspersed with bays and glaciers. Larsen Harbour exceeds in grandeur Moraine Fjord, being almost entirely landlocked, the jagged and pinnacled mountain crests peeping through cloud, look down precipitously on the placid surface of liquid reflections. Larsen Harbour rivals — nay, excels — Milford Sound, New Zealand…