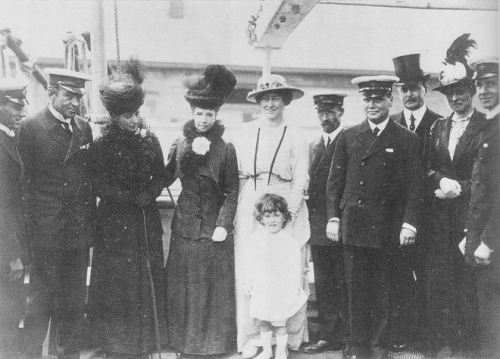 “Shackleton received Queen Alexandra when, at her own desire, she inspected Endurance at the London docks, and showered him with gifts and good wishes. Vividly she remembered him from the Nimrod expedition, and the last days of her much missed husband, Edward VII. The atmosphere was very different now. With her was her sister, another melancholy royal widow, the Dowager Empress Maria Feodorovna of Russia, oppressed by the thunderclouds gathering over Europe. Both were clearly fascinated by Shackleton. Also on board, in one of her rare public appearances, was Emily Shackleton; unhappy now, and somehow apart from her husband.”
— Roland Huntford, Shackleton

“One of the ladies in her entourage…laying a small delicate finger on Crean’s massive chest opposite [a] white ribbon asked, “And what might that be for?” Tom replied, “That is the Polar Medal.” “O” said the lady, “I thought it was for innocence.” One had to be familiar with Tom’s hard bitten dial to really appreciate this piece of irony.”
— Alexander Macklin, quoted in Roland Huntford, Shackleton