“A copy of the program which [I] prepared in order to arouse the interest of the general public in the Expedition:”

The first crossing of the Antarctic continent from sea to sea via the Pole, apart from its historic value, will be a journey of great scientific importance.

The distance will be roughly 1800 miles, and the first half of this, from the Weddell Sea to the Pole, will be over unknown ground. Every step will be an advance in geographical science. It will be learned whether the great Victoria chain of mountains, which has been traced from the Ross Sea to the Pole, extends across the continent and thus links up (except for the ocean break) with the Andes of South America, and whether the great plateau around the Pole dips gradually towards the Weddell Sea.

Continuous magnetic observations will be taken on the journey. The route will lead towards the Magnetic Pole, and the determination of the dip of the magnetic needle will be of importance in practical magnetism. The meteorological conditions will be carefully noted, and this should help to solve many of our weather problems.

The glaciologist and geologist will study ice formations and the nature of the mountains, and this report will prove of great scientific interest.”

SCIENTIFIC WORK BY OTHER PARTIES

While the Transcontinental party is carrying out, for the British Flag, the greatest Polar journey ever attempted, the other parties will be engaged in important scientific work.

Two sledging parties will operate from the base on the Weddell Sea. One will travel westwards towards Graham Land, making observations, collecting geological specimens, and proving whether there are mountains in that region linked up with those found on the other side of the Pole.

Another party will travel eastward toward Enderby Land, carrying out a similar program, and a third, remaining at the base, will study the fauna of the land and sea, and the meteorological conditions.

From the Ross Sea base, on the other side of the Pole, another party will push southward and will probably await the arrival of the Transcontinental party at the top of the Beardmore Glacier, near Mount Buckley, where the first seams of coal were discovered in the Antarctic. This region is of great importance to the geologist, who will be enabled to read much of the history of the Antarctic in the rocks.

Both the ships of the Expedition will be equipped for dredging, sounding, and every variety of hydrogeographical work. The Weddell Sea ship will endeavor to trace the unknown coastline of Graham Land, and from both the vessels, with their scientific staffs, important results may be expected.

The several shore parties and the two ships will thus carry out geographical and scientific work on a scale and over an area never before attempted by any one Polar expedition.

This will be the first use of the Weddell Sea as a base for exploration, and all the parties will open up vast stretches of unknown land. It is appropriate that this work should be carried out under the British Flag, since the whole of the area southward to the Pole is British territory. In July 1908, Letters Patent were issued under the Great Seal declaring that the Governor of the Falkland Islands should be the Governor of Graham Land (which forms the western side of the Weddell Sea), and another section of the same proclamation defines the area of British territory as ‘situated in the South Atlantic Ocean to the south of the 50th parallel of south latitude, and lying between 20 degrees and 80 degrees west longitude.’ Reference to a map will show that this includes the area in which the present Expedition will work.

HOW THE CONTINENT WILL BE CROSSED

The Weddell Sea ship, with all the members of the Expedition operating from that base, will leave Buenos Aires in October 1914, and endeavor to land in November in latitude 78 degrees south.

Should this be done, the Transcontinental party will set out on their 1800-mile journey at once, in the hope of accomplishing the march across the Pole and reaching the Ross Sea base in five months. Should the landing be made too late in the season, the party will go into winter quarters, lay out depots during the autumn and the following spring, and as early as possible in 1915 set out on the journey.

The Transcontinental party will be led by Sir Ernest Shackleton, and will consist of six men. It will take 100 dogs with sledges, and two motor sledges with aerial propellers. The equipment will embody everything that the experience of the leader and his expert advisors can suggest. When this party has reached the area of the Pole, after covering 800 miles of unknown ground, it will strike due north towards the head of the Beardmore Glacier, and there it is hoped to meet the outcoming party from the Ross Sea. Both will join up and make for the Ross Sea base, where the previous Expedition had its winter quarters.

In all, fourteen men will be landed by the Endurance on the Weddell Sea. Six will set out on the Transcontinental journey, three will go westward, three eastward, and two remain at the base carrying on the work already outlined.

The Aurora will land six men at the Ross Sea base. They will lay down depots on the route of the Transcontinental party, and make a march south to assist that party, and to make geological and other observations as already described.

Should the Transcontinental party succeed, as is hoped, in crossing during the first season, its return to civilization may be expected about April 1915. The other sections in April 1916.

THE SHIPS OF THE EXPEDITION

The two ships for the Expedition have now been selected. 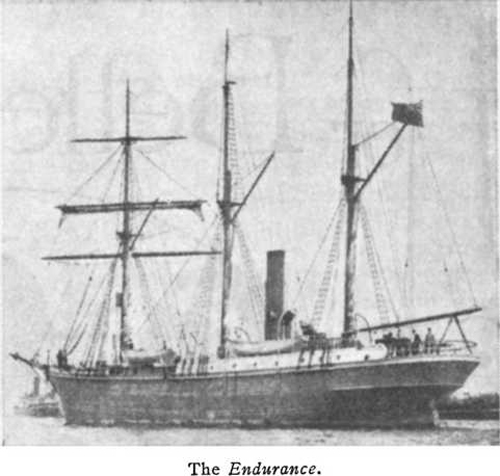 The Endurance, the ship which will take the Transcontinental party to the Weddell Sea, and will afterwards explore along an unknown coastline, is a new vessel, specially constructed for Polar work under the supervision of a committee of Polar explorers. She was built by Christensen, the famous Norwegian constructor of sealing vessels, at Sandefjörd. She is barquentine rigged, and has triple expansion engines giving her a speed under steam of nine to ten knots. To enable her to stay longer at sea, she will carry oil fuel as well as coal. She is of about 350 tons, and built of selected pine, oak, and greenheart. This fine vessel, equipped, has cost the Expedition £14,000. 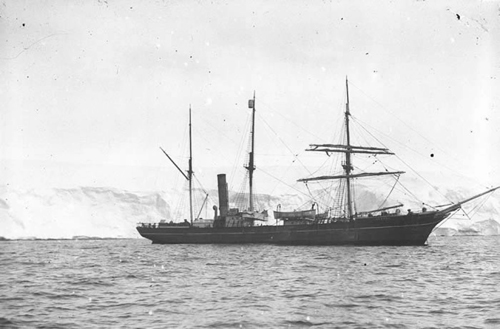 The Aurora, the ship which will take out the Ross Sea party, has been bought from Dr. Mawson. She is similar in all respects to the Terra Nova, of Captain Scott’s last Expedition. She has extensive alterations made by the Government authorities in Australia to fir her for Dr. Mawson’s Expedition, and is now at Hobart, Tasmania, where the Ross Sea party will join her in October next.”